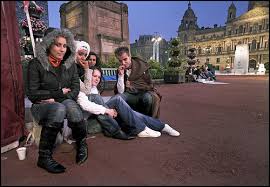 Asylum seekers in Glasgow are facing the prospect of sleeping on the streets in freezing conditions when the wave of “lock-change evictions” – held off for nearly 18 months by public protests and lgal challenges – finally begins in earnest over the next fortnight, with the only available night shelter already full to capacity and frontline workers desperately scrambling to secure more emergency accommodation.

Earlier this month, Scotland’s highest court upheld a ruling that Serco, which claims it has been “demonised” over its controversial policy of changing the locks on the homes of refused asylum seekers, did not contravene Scottish housing law or human rights legislation. The private housing provider now plans to evict 20 people a week.